Kitty Porch Protects Cats for under $50 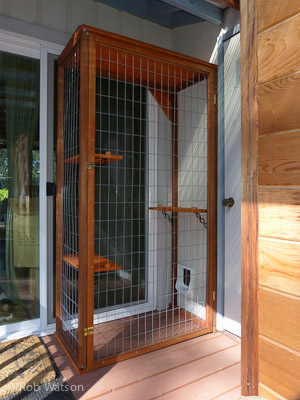 This was a weekend project that was fun to do, looks good and protects your indoor or semi-indoor kitties while affording them a taste of the outside world. There are commercial products like this which can be purchased for hundreds of dollars and have limited customization options.

The total cost of this project was under $50 (not including the kitty door which was already installed.
The 20" x 36" x 72" "cage" allows our cats to step outside and observe the critter highway in back of our house

The tricky part of this project was that the whole thing had to be secure, but the sliding screen door behind it had to still function.

Since kitties love high places and afternoon sun, I also built in three sunning shelves for them to lounge around on. The "front" or large side of the cage is hinged and has two barrel bolt latches. The entire panel can be opened for access. The primary materials are 2 x 6 wire fencing and redwood 2 x 2s.

The enclosure is constructed of redwood 2x2s, 4x2 wire fencing, pine shelving and plywood. The 2x2s were slotted down the middle on a table saw, and the wire fencing was "inlayed" into them for a secure fit around the entire perimeter of each panel.

I only had to construct two sides and a top. The top is a piece of plywood which also acts as a storage shelf. I also added a spring to the hinged side as safety measure, in case one of us need to get into the cage for some reason, and stepped away from it, leaving the side panel open by mistake.

The spring closes the door so if a forgetful human opens it up and leaves without latching it, the door will close by itself. It's up to the human to remember to latch the bolts. The theory is, that if the door is just closed but not latched, a cat who ventures out into the cage will see that there is no opening, and not try to get out. The barrel bolts prevent cats who try to get out from escaping.

Its very secure, durable, cat and critter-proof. I stained the wooden parts before assembling the whole thing with brass hardware, so it looks nice as well.